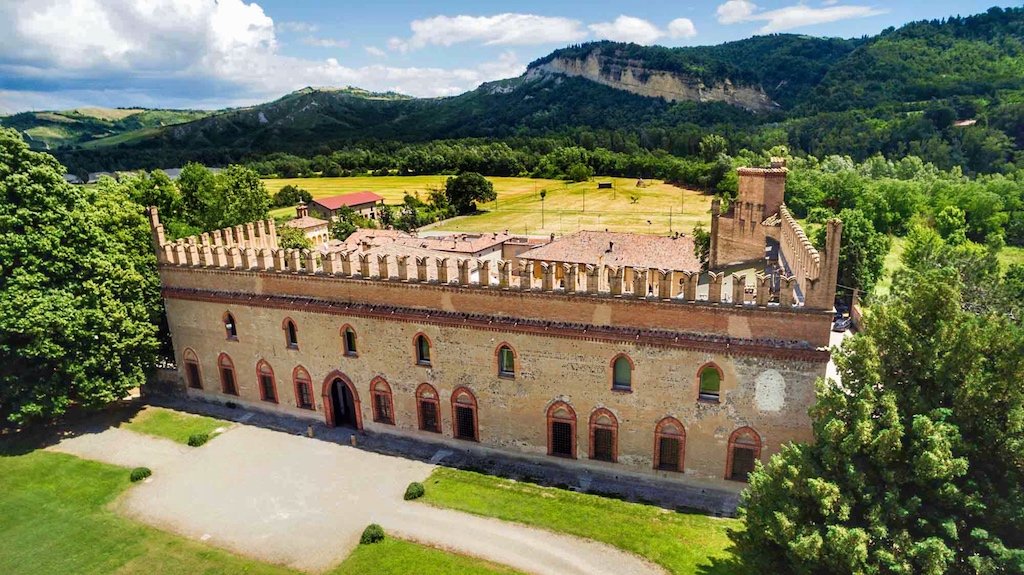 A spectacular complex that carefully preserves the glorious traits of its sumptuous and noble past. Surrounded by the stillness of the countryside, which gently holds the lovely banks of the Rhine River, Palazzo de’ Rossi is certainly one of the most majestic and prestigious historic residences in Bologna. The elegant late-gothic building was erected at the end of the XV century, according to Bartolomeo de’ Rossi’s disposals. He was a rich merchant from Parma, who decided to create peaceful and relaxing oasis in his huge estate, in order to enjoy the pleasures of country life to the fullest.
Next to the residence, a hamlet was founded: houses, small shops, stables, and mills, sawmills, and paper mills, which used to exploit the driving force of the waters of the Rhine. The building was a real residential and productive centre, well-structured and independent, which used to combine business with pleasure and immediately became so prestigious that hosted some of the most famous people of that time, such as Giovanni II Bentivoglio, Torquato Tasso, many Popes like Giulio II della Rovere, Leone X de’ Medici and Paolo III Farnese.
Thanks to such rich, magniloquent and charming history, this residence inevitably represents one of the most exclusive and appreciated locations for many brides and grooms that want to turn their wedding day into a wonderful story and set that into the chest of memory. The courtyards, the rooms, the airy loggias and the giant windows offer a spectacular view on the surrounding countryside and the wonderful asymmetric Italian-style garden, which give shape to a seducing dance among the evocative spaces full of charm and magic. This place was once used to host splendid parties and magnificent banquets; today it is the ideal location to celebrate your love dream. The great 16,000 square metres garden, full of centuries-old trees and surrounded by a majestic crenelated wall, is the perfect setting for a refined welcome aperitif or the wedding-cake cutting illuminated by the starry sky. And if the southern wing, with its elegant Hall, Loggia and adjacent rooms, can host up to 150 people, the Courtyard of honour, with its two spacious side Loggias and adorned with a giant sail from April to October, is the perfect location for the highfalutin and solemn reception. The northern wing, instead, thanks to its characteristic organisation of six different halls, is the ideal location for a sparkling and suggestive after-party.
The bride and the groom can rely on the staff of Palazzo de’ Rossi, as regards the organisation of their event: from the menus to the flower decorations, from the light games to live music and security. Everything at Palazzo de’ Rossi will be perfect, impeccable and meticulously cared, so that the best day of your life can turn into an unforgettable and tailor-made event just like a haute-couture dress.

END_OF_DOCUMENT_TOKEN_TO_BE_REPLACED


In order to ensure the high standards required, the selection criteria adopted by the Certification Commission are very strict and also include:

END_OF_DOCUMENT_TOKEN_TO_BE_REPLACED

The real secret for a memorable wedding